THE NIGHTMARE BEFORE CHRISTMAS, PT. 3

Tim Burton’s The Nightmare Before Christmas is back! Join Halloween’s finest trick or treaters Lock, Shock, and Barrel in a time-limited event that will leave your skin crawling for more. And remember – there’s only 365 days until next Halloween!


*Please note: Some platforms may receive the update at a later time. 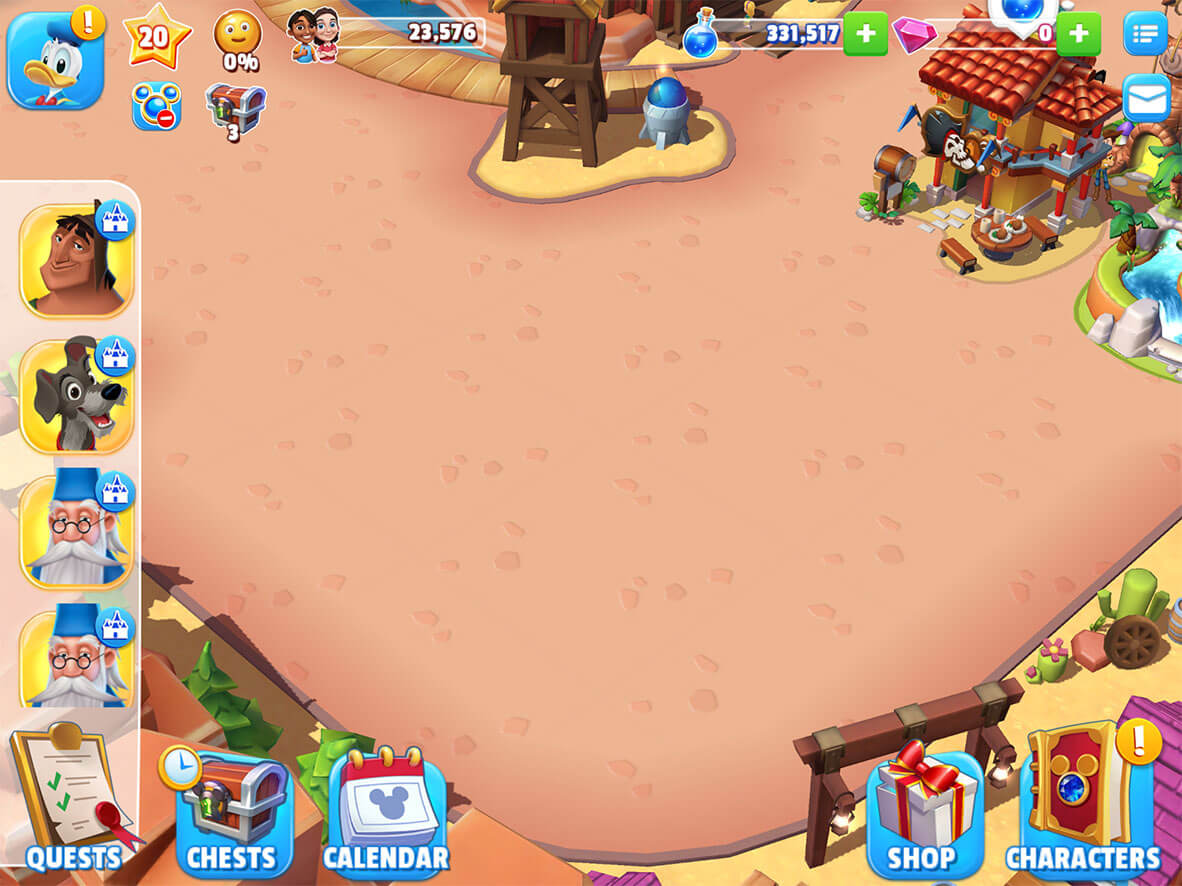 To unlock this new plot, you will need to unlock new frontiers in the Kingdom Quest “To the Wild West!” 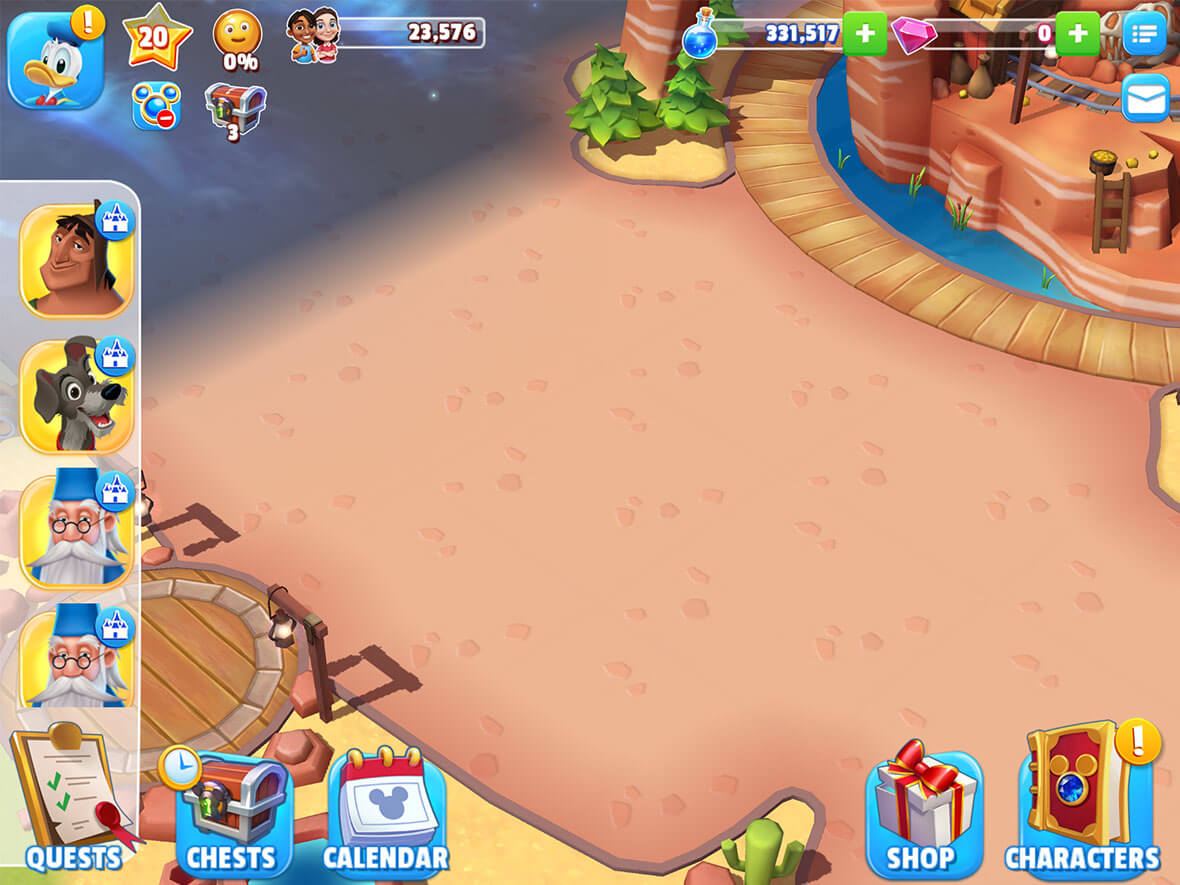 To unlock this new plot, you will need to clear the curse from Big Thunder Mountain Railroad in the Kingdom Quest “What’s Mine is Yours”

THE DISNEY VILLAINS ARE BACK IN SAPPHIRE CHESTS!

The Bride is back! This exclusive, time-limited Disney Parks Character is available once again in our Sapphire Chests throughout Update 44, so be sure to get her before she gets you!

Sapphire Chests will be available in-game through the Chest Shop, as Milestone Rewards, and as Leaderboard Rewards. These Chests will also contain the brand-new The Haunted Mansion Ears Headband Stand as part of the possible rewards. Happy Haunting!

LAND HO! With our new Character Kingdom Limit, we are able to release two new plots of land – with many more plots to come before the end of the year!

The Character Kingdom Limit is designed to help further optimize the game by decreasing the amount of Characters in your Kingdom. If you surpass the Character Kingdom Limit, you will not be able to start any new Activities or Quests. Any ongoing Activities or Quests started before you surpass the limit will still complete. You will also be able to welcome new Characters even if you have surpassed the limit. 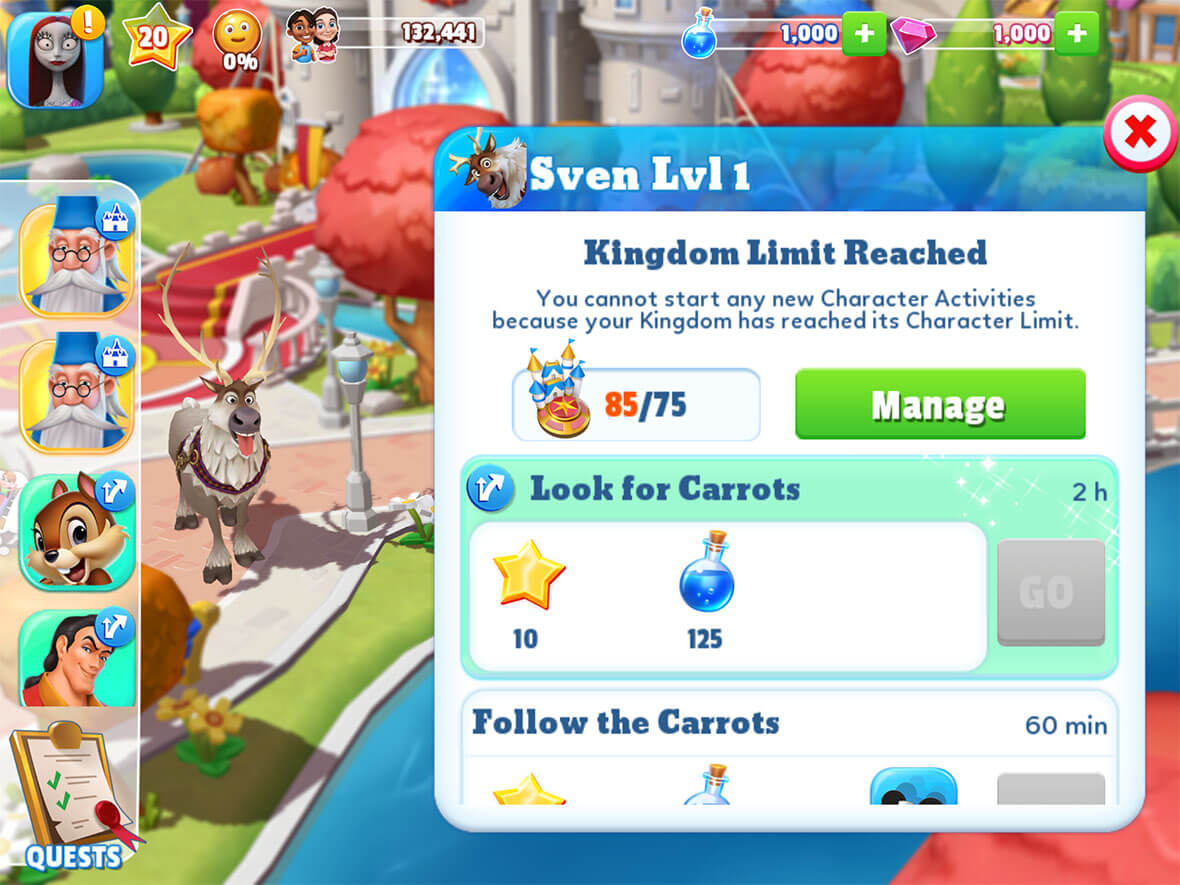 The current Character Park Limit is set at 75 as of Update 44.

If you decline or opt-out, you will be able to change this option in the Settings.

Why do we rebalance the game? Disney Magic Kingdoms is a game with many interconnected systems. Since our initial launch, we have added a lot of new features and content, and each time we do this, it can significantly affect how these systems interact with each other. To ensure that the gameplay experience remains as intended, we are sometimes required to make balancing changes. Ultimately, rebalancing the game is necessary so that Disney Magic Kingdoms is fun and enjoyable for all.

Thank you for your patience and understanding!

Changes have been made to following Character Activities:

- Time to complete changed from 4 hours to 6 hours

- Time to complete changed from 1 minute to 5 minutes

CHECKING ON A FRIEND (SALLY):

- Time to complete changed from 4 hours to 6 hours

- Required level changed from 2 to 10

CHECK ON JACK (THE MAYOR):

- Required level changed from 3 to 2

WORK ON HOLIDAY IDEAS (THE MAYOR AND SALLY):

- Time to complete changed from 8 hours to 6 hours

- Required level changed from 10 to 9

The following Concessions have been added to the Concession Chest:


The following Concessions have been removed from the Concession Chest:

The following Decorations have been added to the Decoration Chest:


The following Decorations have been removed from the Decoration Chest:

The following changes have been made to the Nightmare Before Christmas Legendary Chests:

- Rarity of Zero changed from Legendary to Common

The following items have been removed from their Legendary Chests and added to the Parade Float Shop: