MAY THE FORCE BE WITH YOU!

This is our most desperate hour… it is a period of civil war, and the Rebels are preparing their next battle against the evil Galactic Empire.


Celebrate May the 4th with Disney Magic Kingdoms as we welcome STAR WARS™: Episode IV – A New Hope to the Kingdom. Help Rebels Luke Skywalker, Princess Leia, Han Solo and Chewbacca defeat Darth Vader and one of his best TIE Fighter Pilots. The approach will not be easy… but there is hope!


*Please note: Some platforms may receive the update at a later time,

at the same time!


Thrill Levels range from 1 to 3 Stars, with each level unlocking better rewards. The more Thrill Zone Requests you fulfill, the higher the Thrill Level will be for that Zone.


To unlock these levels, you will first need to defeat Zurg by playing through the Kingdom Quest Storyline. 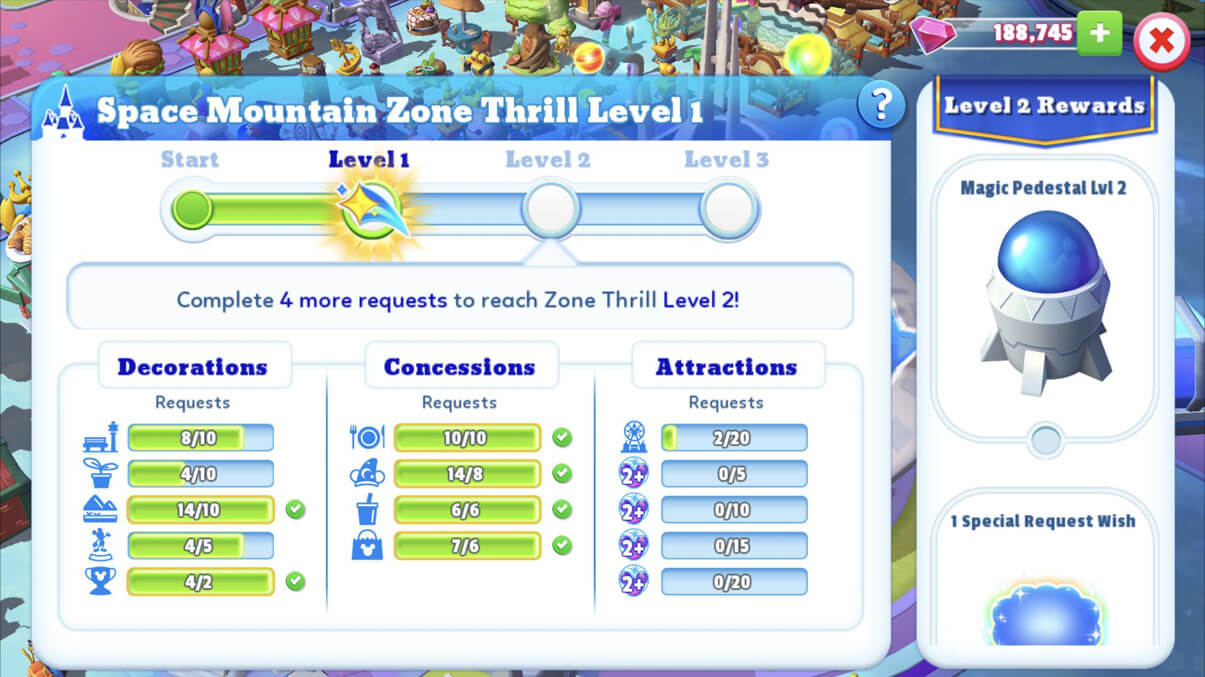 Tap the Golden Scarabs to remove them from your Kingdom!


STORM CLOUDS TAPPER – May 1st to May 3rd

The weather has taken a turn for the worse! Tap away the storm clouds to shine some

light on your Kingdom and earn rewards.


SPOOKY SPIDERS TAPPER – May 7th to May 9th

Clear the creepy spiders that have infested your Kingdom!

Find gold trophies hidden throughout the Kingdom by collecting from attractions

character activities! This Striking Gold Event has both Milestone and Leaderboard

Cuddle up with these adorable Tooka Dolls! Collect them to win sweet prizes.

Tap all of the Heffalump Balloons to earn rewards!


Why do we rebalance the game?

Disney Magic Kingdoms is a game with many interconnected systems. Since our initial launch, we have added a lot of new features and content, and each time we do this, it can significantly affect how these systems interact with each other. To ensure that the gameplay experience remains as intended, we are sometimes required to make balancing changes. Ultimately, rebalancing the game is necessary so that Disney Magic Kingdoms is fun and enjoyable for all. Thank you for your patience and understanding!

The following Characters and Attractions no longer drop Gold Trophies:

- Maui - Tell Tales Of Myself


The following Characters and Attractions will now drop Gold Trophies:

The following Concessions have been removed from the possible rewards:


The following Concessions have been added to the possible rewards:

The following Decorations have been removed from the possible rewards:


The following Decorations have been added to the possible rewards:

- The character Owl has been added to the possible rewards